I had an early Dentist appointment yesterday, so I used the excuse to blow off the entire day from work. An unplanned day off typically means a day in the shop…

Since my son is heading back to school in a few short weeks, I spent a lot of time on his guitar.

I was not happy with the UDEL logo, that was carved into the guitar top, so I planed down some cherry and decided to try carving the same logo into hardwood. 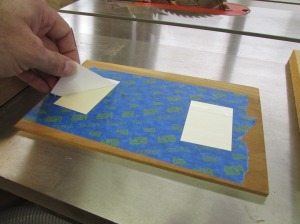 I attached some painter’s tape to the back of the thin piece of cherry, then some double-sided carpet tape. I sat that on top of a 3/4″ piece of particle board, and loaded it into the carver. 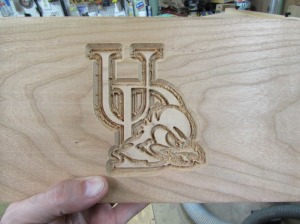 After an hour of carving, I wasn’t much more impressed with the results. The thin bits were still chewed up.

I sanded it down anyway, just to try it out.

I used a 1/4″ spiral bit in my router to cut away the failed attempt at the logo, leaving only the angled sides. 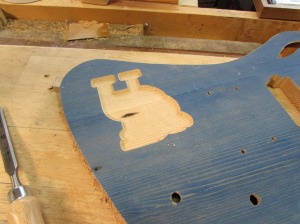 I had cut the logo a few thousandths shy of the back of the board so I trimmed the rest away with a razor knife and test fit it into the pocket on the guitar.

It didn’t look too bad, but I took an hour or so and went back to the computer to create a different version.

While the new version was carving, I used my router to add some channels for the pickup wiring, which I forgot to carve out with the CNC…

I also wanted to spray paint the sound cavities on the guitar body, so I masked off these areas with painter’s tape and paper.

I sprayed both halves of the guitar and let them dry while I checked on my carve. 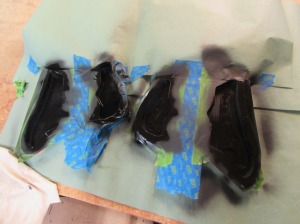 The new logo was more recognizable, but still not what I wanted.

I cut it out anyway, to test out when the paint was dry. 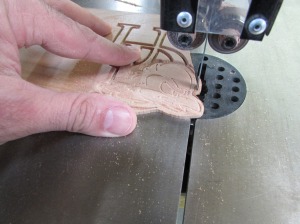 I opted to create yet another version, so I spent another hour on the computer redrawing the logo, but with less detail. 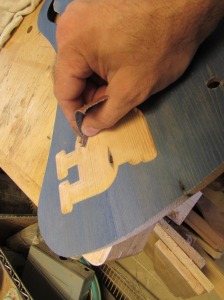 While that one was carving, I sanded down the logo pocket and applied a little yellow acrylic paint to the tapered sides of the pocket.

Blue and gold are UDEL’s colors, so I thought it would look good against the logo.

I liked my third version of the logo the best, so that is the one I am going to use. 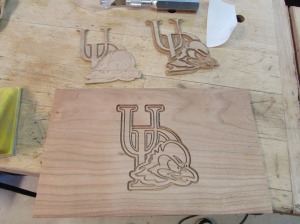 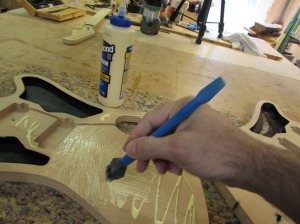 Since the paint was now dry on the body, I applied some wood glue and clamped both halves of the body together. 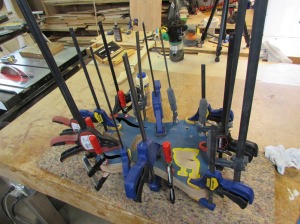 When dry, I used my spindle sander to clean up the sides and remove any glue squeeze-out. 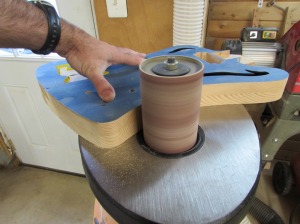 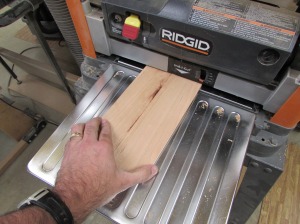 I almost forgot to carve out the control cover plate. I had been trying to decide if I should make it out of matching hemlock, or some harder contrasting material. Since I had to redo the logo, I decided to carve the cover plate from cherry as well.

Since the hemlock is so soft, I decided not to screw on the cover plate. Instead I am going to experiment with some small magnets instead. If it fails, I can always go back to screws. The only problem with magnets is opening the cover. I decided to carve a small taper on one end of the cover plate to help with that problem.

With the cover plate carved, I decided to give it a test. That was when I realized that I had carved it completely in reverse. Doh!

While the correct version of the cover plate was being re-carved, I decided to apply a 1/4″ round-over to the edges of the guitar body with my router.

One last feature that I wanted to mess with, was the neck-mounting section. I deliberately made it longer. 3/4″ past the mounting plate’s location. I wanted to create some kind of rounded end. I am not sure if it will help when moving your hand from the neck down to the lower chords, but I did it any way.

I roughed the shape out with one of my rasps and finished it up with my orbital sander.

When I was happy with the final shape I did some more sanding, by hand, then applied more blue stain to the body. 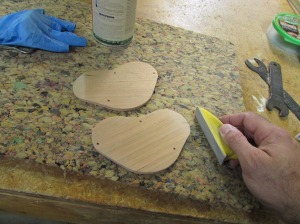 After that had dried, I tested out the new cover plate. It fit much better this time… 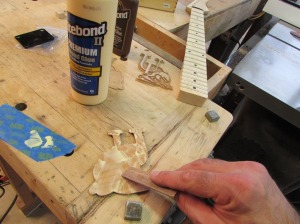 With the body dyed, I can also now install the logo. I spread a thin layer of wood glue on the back and clamped it in place on the body. Since the logo sticks up about 1/32″ above the surface of the board, I was able to clamp a block over it and get even pressure all around.

It turned out pretty good, I think.

Now I need to finish drilling out for the rest of the hardware, then I can start applying finish.