After the dye had cured on my front and rear panels, I loaded the first board into my Carvewright CNC and started the first panel.  The back side ran just fine, but I had a problem when I flipped the board and started carving the front. I should have used two tabs to retain the F-holes, but I only used one. The hemlock is a soft wood, and the smaller F-hole blank fell off and caused a problem with the X-axis motion. This effectively stopped the carve, and wouldn’t allow me to restart. When this sort of thing occurs, there are two approaches. The first approach is to chuck the panel and start over, but that would waste wood as well as several hours of carving. Since the Carvewright is fairly accurate when it measures the board, I can start the program again and it usually locates within 1/32″ of where it cut before. To save a few hours of re-carving, I pulled up the software and deleted all the parts that were already carved. 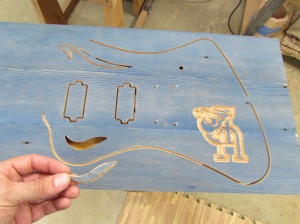 Random slice across the neck pocket

After another hour of carving, it finished. It lined up to the previous carve lines nearly perfectly, but for some reason, the carver decided to make an extra cut across the side of the neck pocket. 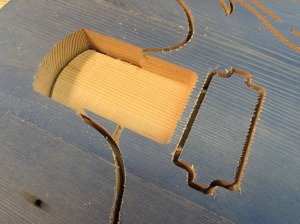 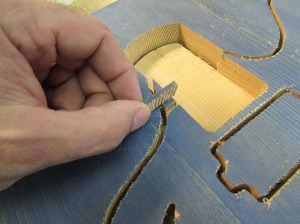 Cut a piece to match

Since I still don’t want to waste more of my hemlock and seven more hours re-carving a new one, I decided to patch it. The whole point to this guitar is to have something my son can take to school and not worry about messing up. A patch or two won’t bother him. 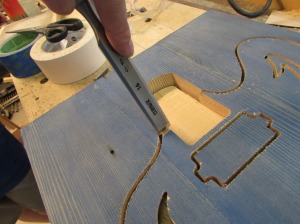 I started by cutting a plug from a scrap with a similar grain pattern, then opening up the slightly curved channel to match the width of the plug. 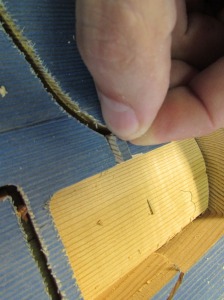 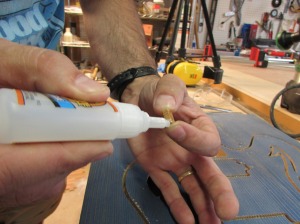 I applied some CA glue to the plug, and pressed it in place. While the glue was setting, but not entirely dry on the outside, I sanded it down flush so the saw dust would embed itself into the hardening glue. This will make it more stainable. I left the waste portion of the carve attached for the sanding so I could rest the sander flat on it. 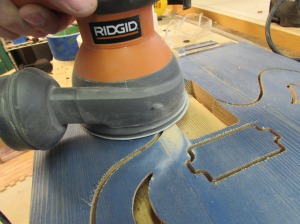 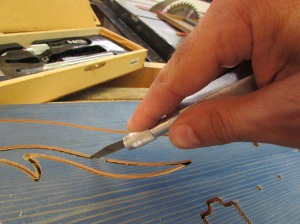 Trimming out the remaining F-hole blank

Before I can sand the sides though, I have to cut away the rest of the waste. I also cut out the other F-hole and the pickup slugs. 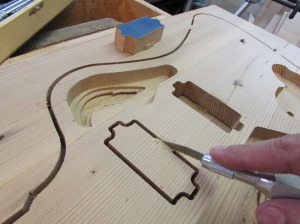 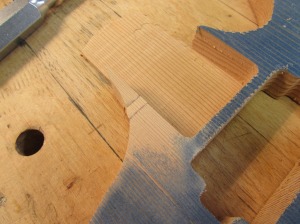 Not great, but functional

The CA glue is rather visible when sanded, but it should fade into the background when new dye is applied. 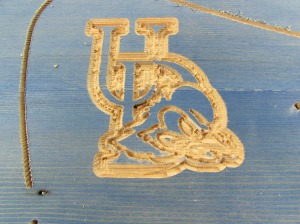 Not happy with that…

The UDEL logo was another disappointment, but not entirely unexpected. I find that the more detailed carves work best on tight-grained hardwoods. I will route this logo away, with my hand router, then carve a new one from maple or something similar to glue in its place. 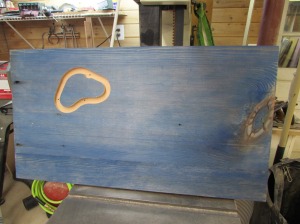 Side 1 of rear panel

The carve of the back panel went much smoother than the front. It only took three hours to carve, and didn’t offer me any problems. 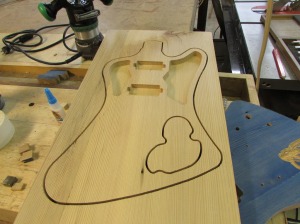 Side 2 of rear panel 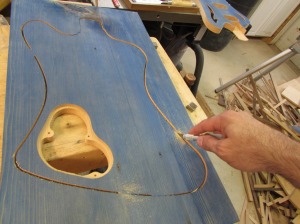 After cutting away the body and the slug in the control cavity, I put the two halves together. It doesn’t look too bad. I really like the look of the F-holes with the body shape. I am not so sure about the logo, but it is what he wants. On a good note, I applied more dye to the plug at the neck pocket and it is barely noticeable now. 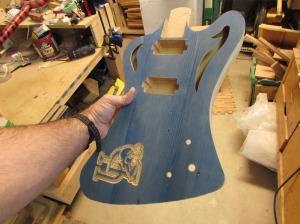