So it is shaping up to be a busier week than I planned. I did have some time last night to start on the counter top. I started by wrestling the assembled part of the desk into an upright position, then placing it on some dollies. This will enable me to move the desk back and forth as I use different tools. 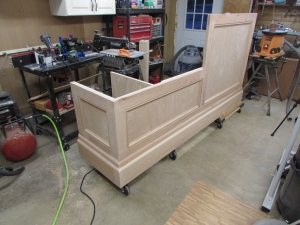 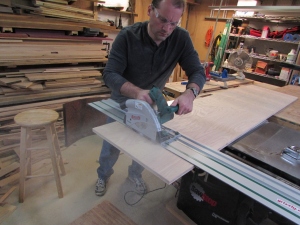 Cutting plywood to length for the counter top

I have a half sheet of oak plywood left, so I cut it down to the length and width of the desk. I also created a stepped notch to go around the tall front panel. 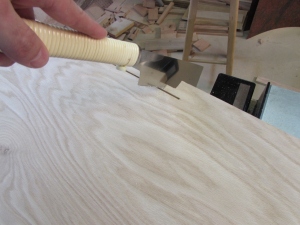 Cutting the stepped notch for the high side 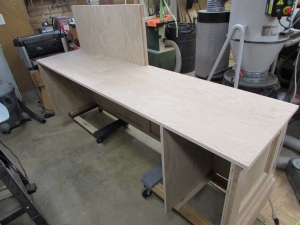 After a test fit, I doubled up the thickness of the outer edge with scrap plywood. 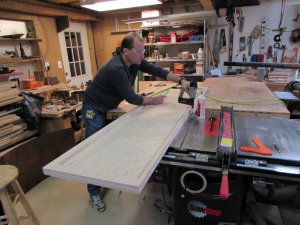 Doubling up the edges

Typically I prefer the look of wood over Formica, but this is a desk and people will be writing on it. A couple of coats of polyurethane is not usually enough to prevent gouging from an uncaring person with a ballpoint pen. 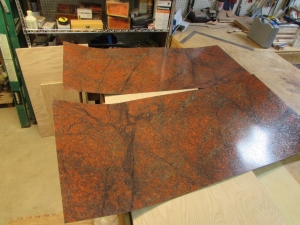 I have two pieces of Formica left-over from the conference room table. I decided to re-use them. Since neither piece is long enough to cover the desktop completely, I decided to place a wide strip of oak veneer between them to separate the sides of the desk. 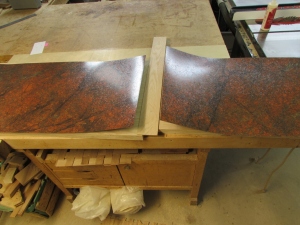 Two pieces seperated with a piece of oak 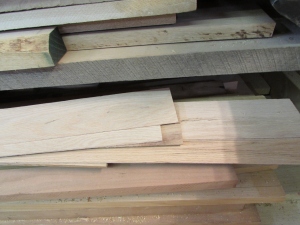 I am a bit of a pack-rat when it comes to wood scraps and I have a lot of pieces of thin stock that was re-sawn from thicker boards. It is typically about 1/8″ thick. I cut a piece about a foot longer than I needed and found a longer board to use as a backer board. 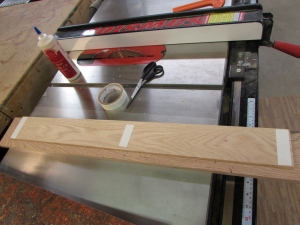 Double sided tape and a backer board

My planer will only plane down to 1/8″ thick, and my Formica is less than 1/16″ thick so I put double-sided tape on the veneer piece and stuck it firmly to the backer board. Instead on my normal carpet tape, I am using a newer tape from Avery that is designed to have a very strong hold unless peeled up from the side. If I used regular carpet tape, I would destroy the veneer trying to pull it off. I got this tape as a free sample at a Woodcraft booth at one of the Woodworking shows a couple of years ago. It works great, but I have long since thrown away the wrapper with the name on it… 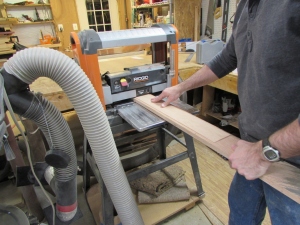 I took several light passes through the planer until I matched the thickness of the Formica. 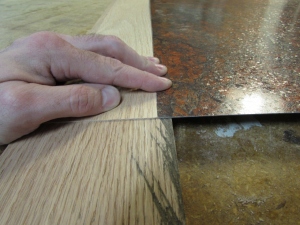 Same thickness as the formica now

You can see in the next picture why I made the piece about a foot longer than I needed. The planer tends to snipe and it is really noticeable when it is under 1/16″ thick… 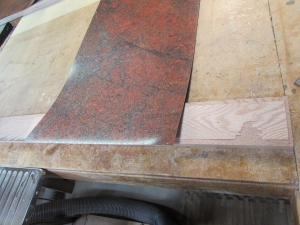 That is why I made it longer than I needed…

the veneer is so thin now that I can easily cut it with scissors. 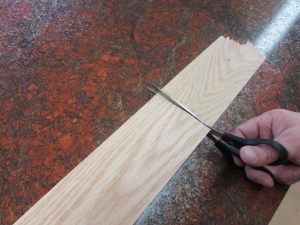 So thin you can cut it with scissors 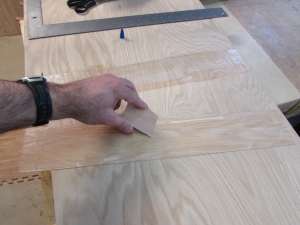 Apply a thin layer of wood glue to each surface

I applied a very thin layer of wood glue to the plywood and the back of the veneer, then stuck them together and rolled the veneer as flat as I could to make sure there was as much contact as possible. 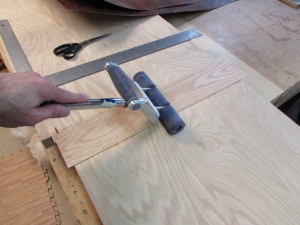 Roll out any air pockets

I clamped a piece of plywood down over it, then decided to add a block to the center and held it down with a cherry board cantilevered out to the ends where I could clamp it. 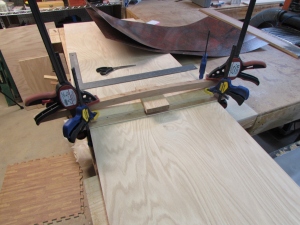 Clamp it down tight

Next I got out my contact cement and a foam roller. I used the high VOC (smelly) cement stuff on the conference room table and my wife was not happy with the smell, so this time I went with the low VOC (not as smelly) stuff. 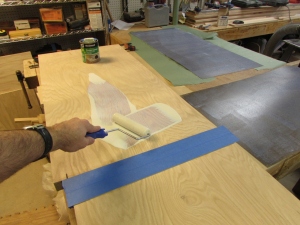 Rolling out a coat of contact cement on both surfaces

I masked off the oak veneer then I rolled it out, thin and evenly across both the Formica and the plywood and let it dry for about 20 minutes. 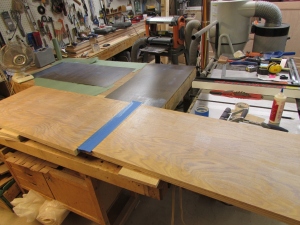 Waiting for it to dry

When dry, I sliced the rubber cement away from the tape with an Exact-o knife to remove the masking. 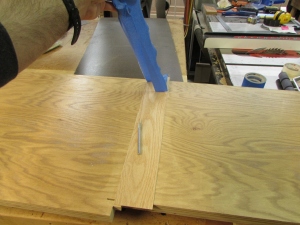 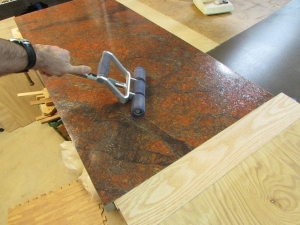 I laid the pieces of Formica in place and rolled them out to make sure there was good contact everywhere. 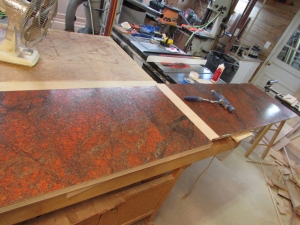 Next I placed a flush trim bit into my router and trimmed away the excess, all the way around. 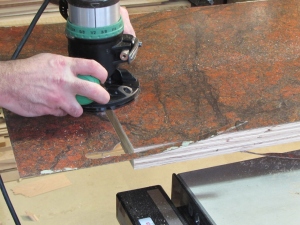 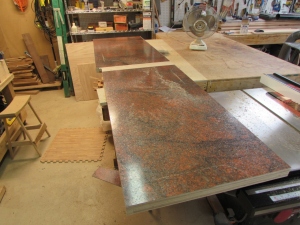 I laid the top in place, it was a good fit. 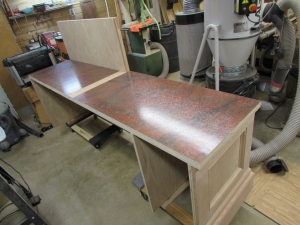 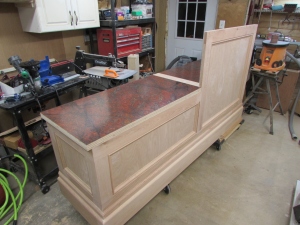 I will be adding a 1-1/2″ square piece of oak, with the outside rounded over, to the perimeter of the top, when I can find the time. Hopefully that will be this weekend but my friend Rob is getting married this weekend, so I may be a little busy eating wedding cake instead… 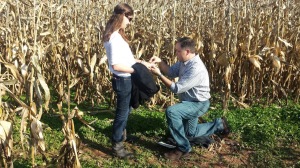 Jen mulling over the question…