I was all set to return the Domino to my buddy Dave yesterday when I remembered that I completely forgot to build the lower base for the tabernacle stand. So last night I scrounged through my cut-offs to see if I had enough 6/4 red oak to build it. Of course I didn’t.

Planing the last of the 6/4

I had one large piece that had one funky edge, and some thinner off-cuts that all had funky edges. I trimmed up what I had and laid them out. I was about 8″ shy of what I needed.

I have a small stock pile of 6/4 white oak that I have set aside to build a bench top, so I snagged one of those pieces. I cut it down to 4″ wide and planed it to match the thickness of the red oak. The color is not the best match, but it will be stained and that part will be tucked in a corner, almost completely out of view.

I did a dry-fit and laid out the location of the Dominos. I won’t bore you with the details of cutting and glueing because they are exactly the same as the previous post.

Cutting mortises with the Domino

Tabernacle base clamped up

The one interesting aspect of this glue-up is the large 45 degree angles on the sides. They completely prevent me from clamping anything but the very center. I had some large 45 degree off-cuts, from the miter on the altar base, in the scrap pile, so I loosely clamped them to the sides, then clamped them heavily in the other direction. The horizontal clamp keeps the wedges from sliding down with the downward clamping force. The pressure on the wedges is then transferred inwards then downwards effectively clamping the rest of my glue joints together. The only other thing I had to do was clean out the glue squeeze-out a bit. This is a sub-base so most of it will be covered with a 1″ thick piece. I cleaned the last inch or so, on each side, with thinner to prevent the glue from causing finishing problems later. 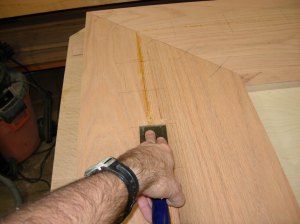 Scraping down the glue joints

With that done for now, I unclamped the altar base and scraped down the glue squeeze-out up with a 2″ wide chisel. with something this large, and all of the opposing clamping angles, some of the wood shifted slightly. So I attached the high spots with my #4 smoothing plane. After about 2o minutes of this I had a reasonably flat, glue free surface, top and bottom. The base seems completely rigid, but it will get even more so when I attach the 1″ thick base cap. 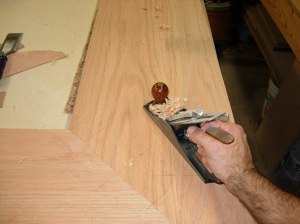