While I have been busy working on my altar project, Adam has been coming down to the shop and working on a project. He is a big fan of the Dr. Who series, so he decided to try building a Tardis of his own out of scrap cedar. For those of you who are not Dr. Who fans, the Tardis is a time travelling police box. He marked and cut the wood with a hand saw and a band saw. Then he planed down the edges with his hand plane. I helped him plane the angles on the top, but he did most of it by himself. Unfortunately I did not get any pictures of his project until he was almost done and asked me for some help. What he required was a small sign to mount at the top of each side that said “Police Box”. His thought was that it would be a good exercise for the new CNC router. So I took a few minutes to lay it out and brought it down to the CNC. 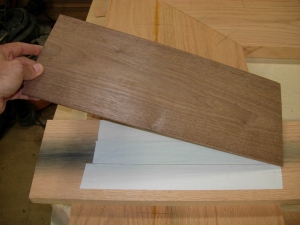 My first inclination is always to try to do the easiest options first, so I thought to use a piece of Walnut veneer that was laying in the scrap heap. I double-sided taped it to a larger board. This way I could cut through the veneer without losing the part or cutting the traction belt. Of course the veneer varied slightly in thickness so half of the shallow cuts didn’t actually ever reach wood. So after wasting a half hour trying to save five minutes, I just planed down a piece of oak to the correct size and used that instead. 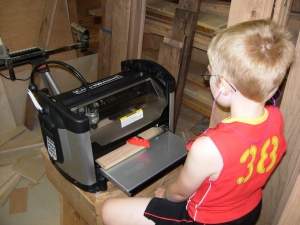 For some reason I didn’t bother to take a picture of the board after the CNC finished. I was working on the altar at the same time, so I was distracted. I had the letters cut about 1/16″ into the wood, then I cut out each sign. It was just a matter of peeling the separated signs from the tape. We painted the letters (and most of the face as well) with white paint. 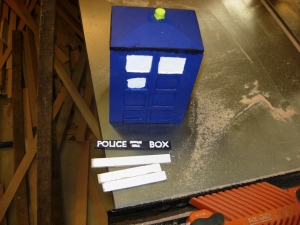 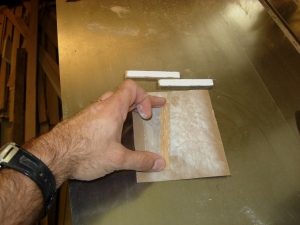 Once the paint dried, I ran the signs, face down, across some 220 grit sand paper until all of the surface paint was removed. 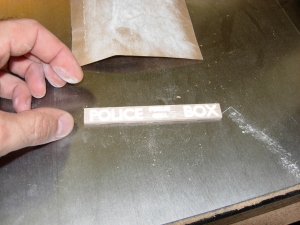 With the paint removed, but the letters remaining, I stained the rest of the wood black with a sharpie marker. Staining with a brush or cloth would have filled the letters, so the marker worked well. 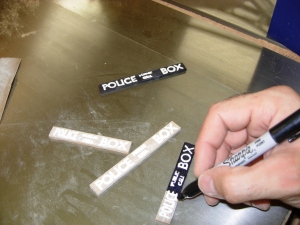 Staining with a Sharpie 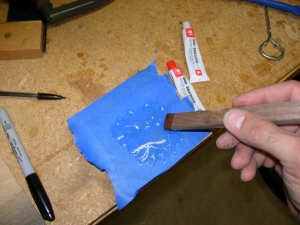 With the signs all done, I need to attach them to the box. Since the box was hand crafted by a 10-year old, there were a few gaps, so I decided to attach the signs with epoxy. Unlike glue, epoxy will fill gaps and make them solid again. It also cures quickly for the impatient. As I was getting ready to go upstairs and find a disposable plate or cup to mix the epoxy on, I had a thought. I could just attach a few small pieces of painter’s tape to the wood, then peel off the tape when I was done and throw it away. 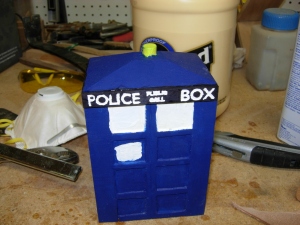 The epoxy worked well and I soon had all four attached. I clamped them in place with a couple of rubber bands and let it sit for 10 minutes or so until it set. 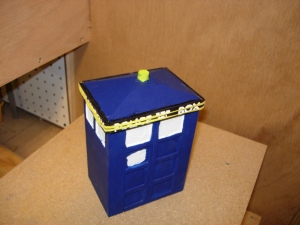 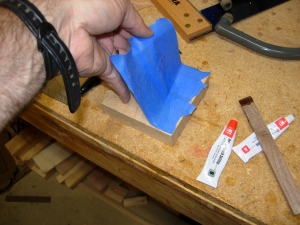 The tape came away from my block of wood with no problems, so I can use this block again. When Adam woke up the next day, he was very happy with the final product. 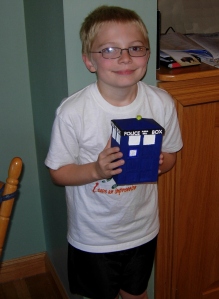 Adam and his Tardis

This entry was posted on September 6, 2013 by Lwroten in From the scrap bin... and tagged Build a mini tardis, Tardis, Wood Tardis.