Well, the seats are all glued up. I pulled the clamps and, as I suspected, the cauls were stuck to the seat. Just a quick tap with the hammer and they fell off with no problems. I flipped the seats over to clean up the bottoms so I had a flat surface to work from. Once again, the card scraper seems to do the best job of cleaning up the glue squeeze-out.

With the back cleaned, I move on to laying out the seats. With the extra inch or so on either side, the layout was a bit more difficult than the first seat. I started that one with the seat boards cut to length so I had four straight, square sides to start with. With these, I determined the rough center of the seat and drew a reference line. I stated by laying out my arcs with a crude beam compass. It is just a stick with three holes drilled in it. I poke a finish nail through the pivot hole and my pencil through the holes at 10″ and 15″ to swing the arc. Nothing fancy, but it works well. 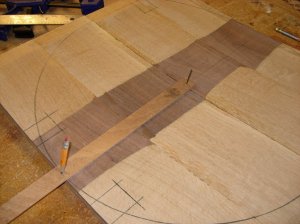 With the arcs drawn, I clamped a straight board to the center line and laid out my notches and flat sides with two squares.

Laying out the seat

With that done, I had to cut out the seats. I could have cut the flat sides on the band saw, but they would have been slightly wavy. I thought this would be a perfect opportunity to use the new saw. It will cut 14″ at 90 degrees, so I clamped it in and tried it. It cut a few inches past my straight portion of the seat, giving me two perfectly parallel sides. The clamp is pretty cheesy, but everything else worked perfectly.

Trimming the seat’s sides on the new saw

Cutting the seats out on the bandsaw

I finished the rest of the cuts up on the bandsaw. The notches are a pain, and I am sure there are better ways to cut them, but with a little patience, I had everything cut and ready for sanding. 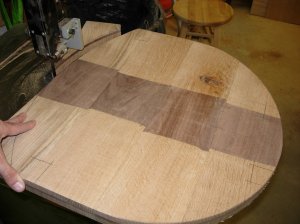 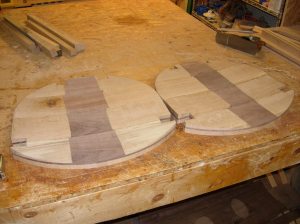 I didn’t have as much to take down on these seats as I did on the prototype, so I used the 120 grit flap sander on the angle grinder. It may be still a bit more aggressive than I needed, but it did the job. The grinder sure makes one heck of a mess though. I will be doing a lot of vacuuming tomorrow when all the dust finally settles. With the seams leveled out, I broke out the orbital sander. It does seem that using the clamping cauls brought the boards into better alignment than the prototype, but there is still a little up and down. Oh well, I like it better that way anyway.

This entry was posted on May 9, 2013 by Lwroten in furniture and tagged glue laminations, oak, Pub chairs, walnut.