I spent most of my time glueing today. I finished up glueing the rest of the seat pieces first.

Trimming up the seat pieces-1

While they were drying, I experimented with trimming the glue and extra walnut on the table saw. Since the walnut was wider on both sides, It wouldn’t slide along the fence parallel to the oak. So I added a thin strip of oak next to the fence.  The oak portion of the seat boards was able to follow the fence as long as I cleaned any glue out of the way.

Trimming up the seat pieces-2

After a couple of hours, I pulled the clamps off the seat boards and moved them over to the first of the rear leg blanks. This board was wider and longer, so each leg blank used all of my clamps. Two hours later, I clamped up the other leg blank. I told you I spent most of the day glueing things… 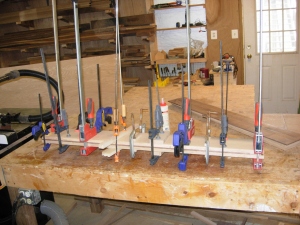 Glueing up a rear leg blank

I decided to use my hand plane to clean up the sides of the leg blanks. I didn’t have nearly as much glue squeeze-out with them so it was quick work to touch them up.

Cleaning the edge of a rear leg blank

The last thing I needed to glue up today was the front legs. Which reminds me that I never made pieces for the seat back. Oh well, there is always tomorrow.

glueing up the front legs

This entry was posted on April 14, 2013 by Lwroten in furniture and tagged oak, Pub chairs, walnut.