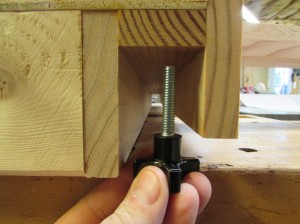 Time to figure out my rail attachment. I have some thumb screws with 1-1/2″ of thread. That means it I will have to attach it from the top, not the bottom as I planned. 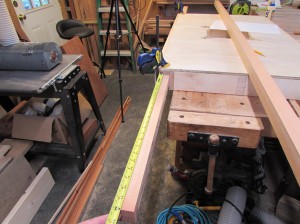 I centered the rail and clamped it in place, then located the center of the rail on top of the bier. 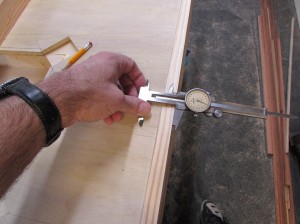 I determined the size and depth of the shoulder and drilled a counter-bore. 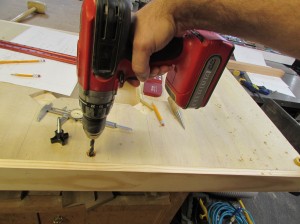 Then I drilled a through hole down into the rail. 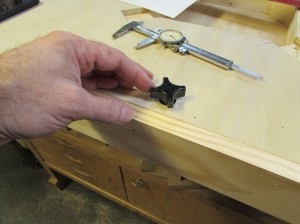 I measured the inserts and drilled a larger hole in the rail for them.

I bought a tool for installing the threaded inserts. This made it a lot easier to install straight. There is a hex socket in the insert in case I need to remove it. 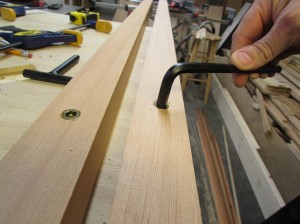 The thumb screw lines up well and holds the rail nicely. I could probably leave it as it is, but I have some nice 15# magnets that I think will work well to quick connect the rails and locate them.

To locate the holes for the magnets, I made a drill template that had a little foot on one end.

I marked the drill depth, and clamped the template in place, then drilled the pocket. 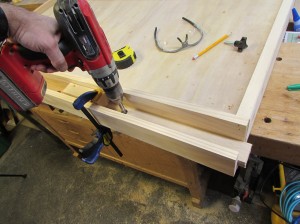 A small screw holds the magnet in place. 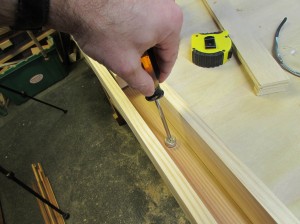 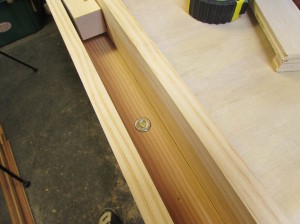 With both magnets in place, it is time to lay out the rails. 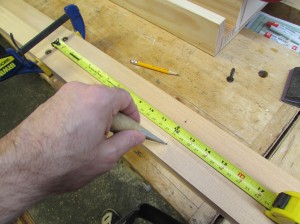 I drilled and installed the magnets without a template, but the holes were carefully marked. As you can see in the picture below, I managed to mess up one and had to plug it to attempt again. The magnets will be strong enough to overcome being slightly off-center anyway.

I need to leave the rails square within the channel, but I want them to be round outside where people will hold them. I marked the rails about 1/4″ away from the body to mark where the round section will start.

I loaded a 3/4″ radius bit into my router table and marked where I needed to stop my cut. I ran the end of the rail along the cutter until my marks lined up, then carefully stopped the cut and removed the rail.

Repeating this on all four sides gives me a nearly round rail. Good enough to be a comfortable grip I hope. 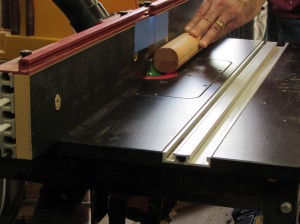 Next I did some smoothing and blending of the transition area with my small sanding blocks. 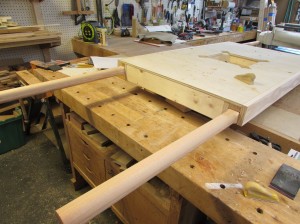 With the rails in good shape, I moved back onto installing the cleats.

I have some 95 degree stop hinges that I located on a center line. I drilled and installed the two screws in the bier first, then marked the cleat side of each of the four cleats to get the hinges located in the exact same position on each. 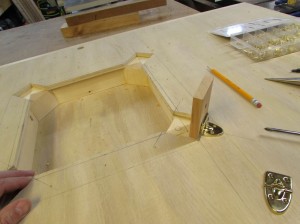 After the holes were drilled and the hinges attached to the rest of the cleats, I set them in place and marked the rest. Theoretically I will be able to swap them around without a problem. Hopefully they will never be removed, but it doesn’t hurt to make them all the same. 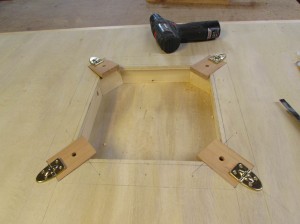 When they were all installed, I used the same size bit that drilled the cleats to make a center mark for the location of the threaded insert.

Then I drilled and installed the insert. 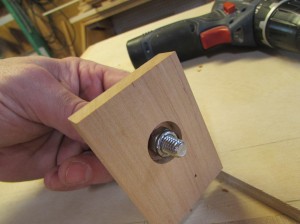 I attached a locking nut to the thumb screw leaving about 3/16″ of the threads loose to move.

This keeps the thumb screw captive while leaving enough wiggle to engage the threads and tighten the cleat down. It is a bit fiddly trying to line everything up, so I may come up with an alternative solution.

But for now, they work and it is time to remove the hardware and sand everything down to prep for finish. 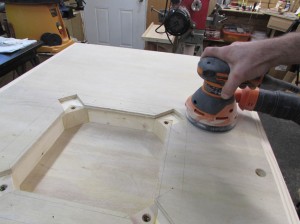 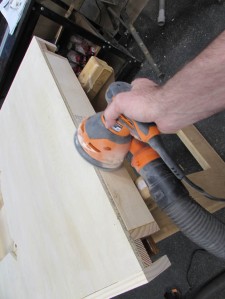 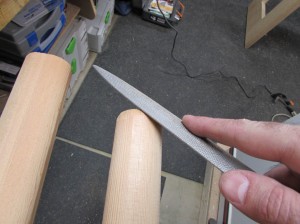 The thing I put off until last is rounding the ends of the rails. This is going to take a while… I used my rasp to file down the end to approximately a 3/4″ round, then I used my orbital sander to blend everything out. 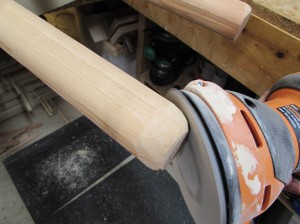 Last I hand sanded to a finer grit to make everything smooth.

One end took about 20 minutes, only three more to go… 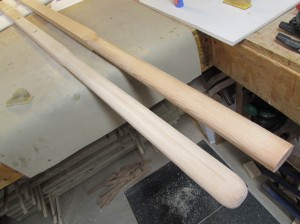 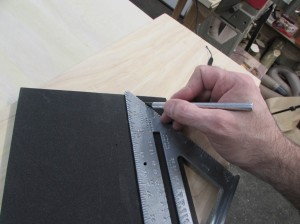 To line the socket, I have some dense foam left over from the last project. I used an Exact-o knife to slice the pieces until I had enough to line the bottom. 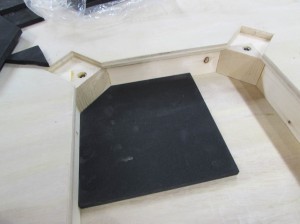 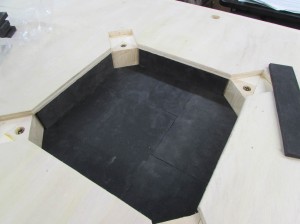 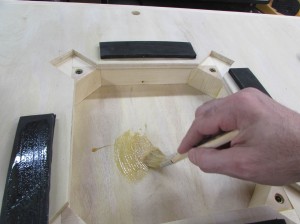 Everything jambs together so nicely that it holds itself in place, but to ensure that nothing gets lost, I applied contact cement to the wood and the foam and let it dry before installing it back into the socket.

If you are impatient and don’t let it dry completely, it will peel away. Don’t ask me how I know… 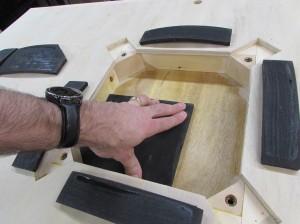 I almost forgot, I need a couple of short legs to raise the bier up enough that the rails can be dropped down and removed from the front without having to be slid out the ends.

These were just more pieces cut from the 2″x8″ and held with glue and brads.

Now it is time to start applying finish. 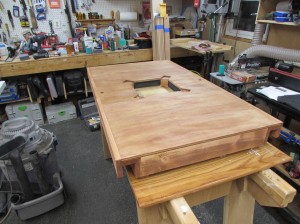 I applied cherry stain with a piece of an old Tee-shirt (washed so many times that it is practically lint free). 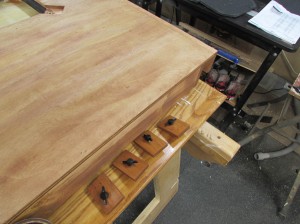 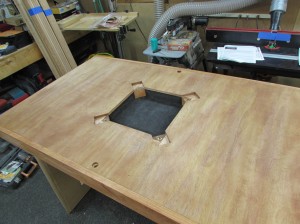 Everything has been stained and the hardware re-attached. The statue will be paying my shop a visit tomorrow evening and we can do a test fit to make sure no modifications are needed prior to putting on the polyurethane finish.

Another ten-hour day in the shop has this project almost complete. Hopefully it only needs a couple of coats of finish and it can be delivered on time.

This entry was posted on April 25, 2019 by Lwroten in Church projects and tagged attach with magnets, bier for our lady of lourdes, Build a bier, captive fastener, may procession.