My wife, Tracie, wants to start doing bigger things on the lathe, so I prepped some cherry for her to turn a bowl with.

I started with some rough 3″x3″ stock, that my buddy Dave cut for me several months ago. It has been drying under my workbench for a while and the moisture content is now low enough that I won’t have to worry about it shrinking. I planed down one of my 3″x3″s and cut it into 10″ lengths, and glued them together. When it was dry, I cut the panel into a circle on my bandsaw. 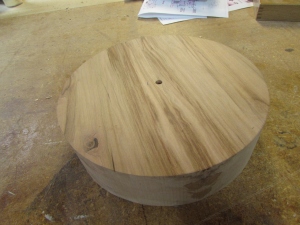 I am going to have her use a wood worm screw, mounted in the chuck, to hold the blank.

I drilled a pilot hole in the center, and screwed the blank on, up against the chuck. 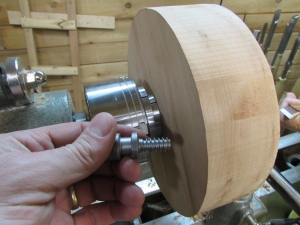 The first step was to cut a 2″ diameter hole into the face, slightly angled to receive the dovetail of the chuck jaws, once the bottom was more complete. 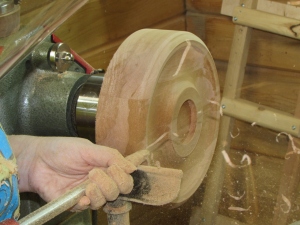 Tracie used a round scraper to remove all of the waste from the bottom of the bowl, stopping occasionally to admire the grain.

When the bottom was shaped, she started working her way around to the top.

I attached the curved bowl rest, to give her more support to continue sculpting the top of the bowl. 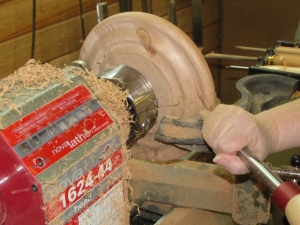 Once she was happy with the general shape, we unscrewed the half-made bowl, and removed the wood worm screw from the chuck. We flipped the bowl around and mounted the bottom onto the jaws of the chuck.

I used my largest forstner bit to drill a starter hole down to the final depth. 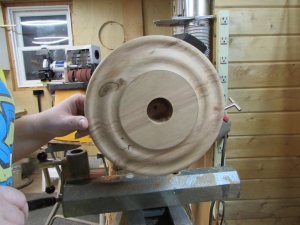 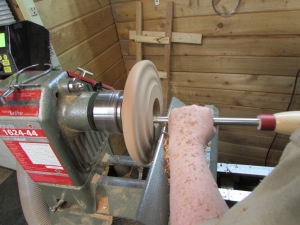 Then it was back to scraping… 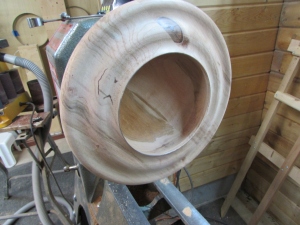 When she had finished roughing out the bowl shape, and scraped as far into the side as she safely could with the scraper, Tracie switched to a hollowing tool that I bought for her. It allowed her to cut around the corner a bit more, thinning down the sides further. 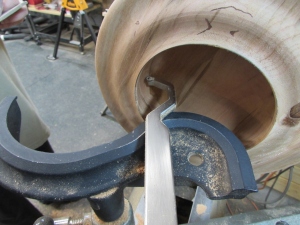 Next she did a lot of sanding. Since half of the exposed surface was end grain, it was a bit rough. 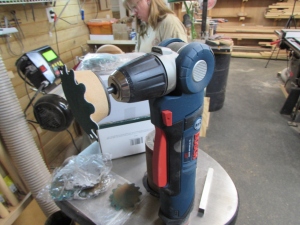 I recently bought an angled-head drill to use for bowl sanding, so I thought I would give that a try.

Since the sander was spinning in a different direction than the lathe spun, it did a really good job of cleaning up the rest of the surfaces. 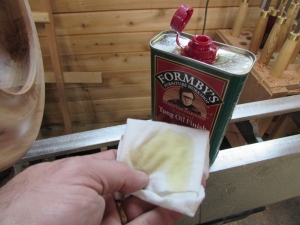 I recently watched a video where the wood turner used Tung oil as a friction finish and I thought this would be a good project to try it on. 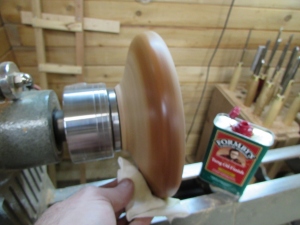 It worked pretty good, but the finish was still tacky when done. 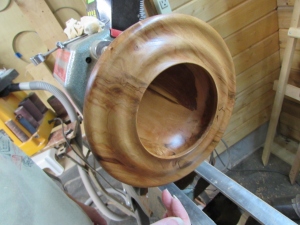 Rubbing the oil in at 1200 rpms really seemed to push the finish down into the more porous end grain. 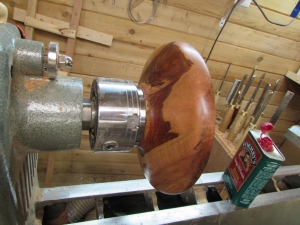 After the bowl had dried, I removed it from the chuck and flipped it over so we could finish the bottom ring that the bowl sits on.

We sanded everything down with 400 grit paper between each coat. 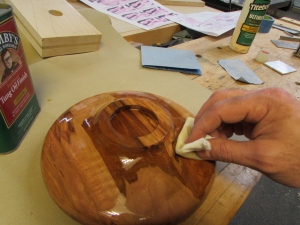 After applying two more coats, the bowl was looking smooth and shiny.

We are not really sure what to use this bowl for, but Tracie really likes the grain and the shape. I made a slightly larger blank for her to play with when she has more time. She is thinking maybe that one will become a fruit bowl. We will see.

This entry was posted on April 20, 2018 by Lwroten in From the scrap bin..., Misc... and tagged cherry bowl, Hollowing tool, Tung oil friction finish, turn a bowl, turn a bowl on a lathe.