I had a little time today before Erin came over to work on the bar, so I wanted to get a few things prepped. 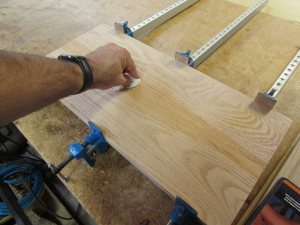 I need an arched opening for the door so I glued up a large panel and tried to match the grain and color as closely as possible. To achieve that, It all came from the same board. Before joining the two halves, I cut away a strip to use as the sides of the door opening, then, when the panel was dry, I loaded it into the CNC and started the arches carving.

While that was running, I cut two 3″ wide pieces of solid oak to attach to the sides of the plywood. This will cover the plywood edges, as well as widen the face. 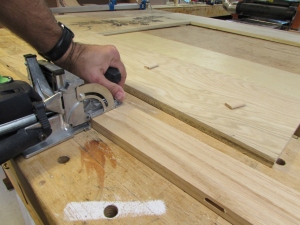 I used my Domino jointer to cut the mortises, then applied glue and clamped them up. 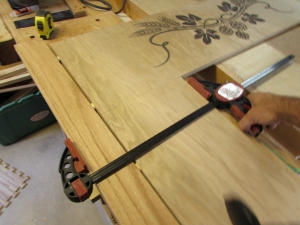 It took a little creative clamping to make sure it all dried flat. 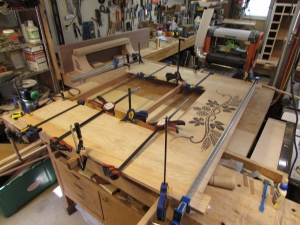 While that was drying, the CNC finished the arches. 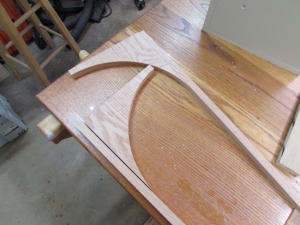 I paired each half-arch to one of the side strips, that I set aside earlier, then glued and clamped them up. I could have cut each from a much larger board and avoided glueing on the sides, but that would have wasted a lot more wood. 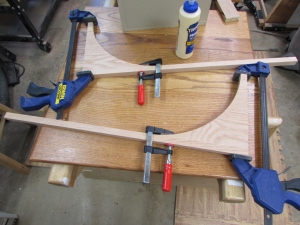 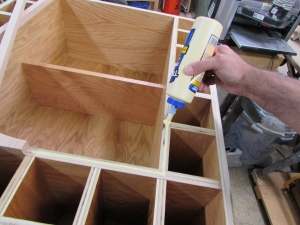 I applied some glue, then pin nailed the arches in place. 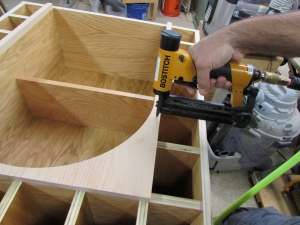 Not bad, the grain matches perfectly and now we can make the doors.

Erin showed up and brought her sister Diana over to assist as well.

The walnut panels, that I have for the doors, are not very flat. I pulled out my planer sled and had Erin adjust the screws till the panel was supported and stable, then we ran the doors through the planer until one side was flat, removed the sled and planed the other side down till the board was 3/4″ thick.

I could have cut the doors out on the CNC, but then Erin would not have learned the fun of making arched doors herself… 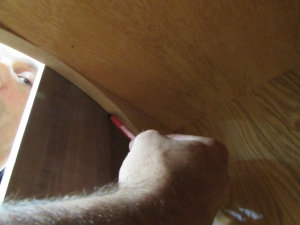 We set the door panels in place, one at a time, and I marked the inside along the arched frame.

With both doors marked, Erin started cutting them out on the band saw.

She cut just outside the line, then sanded the panel down the rest of the way on the spindle sander.

Diana was looking a little bored, so I handed her a drill and set up my Kreg jig so she could drill a bunch of pocket holes into a couple of pieces of 3/4″ plywood. These will be used for temporary flanges for mounting the face to the cabinet. 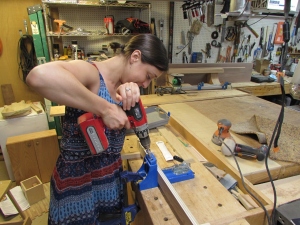 Once the doors were cut and sanded, we did a fit check. They are really tight. That is good for now, I can fine-tune them later with a block plane.

To create the plank look in the door panels, I set up a Vee-groove bit in the router, and set the fence so that the first cut would be right down the middle. Then I moved the fence so we could groove the inside edge. I will chamfer the outer edges later with a 45 degree chamfer bit. It has a bearing that will follow the curve. This will be easier to do free-hand with a router. A little sand paper wrapped around a wood block was all it took to clean up the grooves. 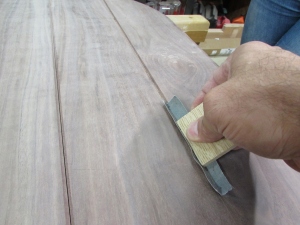 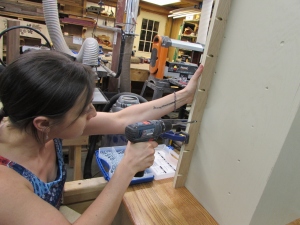 I had Diana install the flanges to the sides of the cabinet, with some pocket hole screws, then I could set all of the other parts up against the cabinet. The flanges will allow me to attach to the face, from the rear.

Everything is starting to come together nicely, just a few more parts, then it will be time to start applying finish.

This entry was posted on August 28, 2016 by Lwroten in furniture, Misc... and tagged building a bar, carvewright CNC, carving, carving a mantle, convert a fireplace to a bar, fireplace bar, whiskey storage, wine storage.