After letting the primer dry for a day, I came back to finish up. Since my roller was no longer useable after the last bout with the primer, I decided to use an old brush and a cheaper roller. These I will just throw away when I finish with the primer, so I don’t have to do any clean up with the nasty lacquer thinner.

I flipped the vanity on its top, to expose the un-primed back side, then started by cutting in the edges with the brush, then moving on to the foam roller, that I found in the back of my paint cabinet. 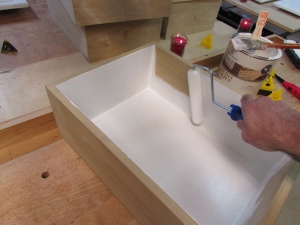 I then repeated the same process with the six drawers. I left them to dry on painter’s pyramids with their bottoms unprimed. I don’t actually think there will be a need to paint the bottoms of the drawers. They are not typically visible. I may come back to it later, but for now, I am going to ignore them…

After letting everything sit drying for another day, I loaded some 220 grit paper onto my sanders and got to work sanding down the primed surfaces. This primer is excellent at sticking to the wood as well as hiding the different tones of the grain completely, but it has a somewhat blotchy appearance. It also seems to raise the grain, like a water-based finish would. This surprised me, since it is solvent based. Basically when it was dry, it was a lot more textured than I expected. I was a little disappointed. The salesman at Benjamin Moore had mentioned that I should sand the primed surfaces before painting, so that is what I did. I was surprised at how smooth the primer got with just a little sanding. It still looked a little blotchy, but it felt a lot better. Sanding and clean-up took several hours and I had to let the dust, in the air, settle before I could paint.

I decided that I didn’t really have enough room to set up a spray booth, so it was back to the brush and roller. I was assured, by the salesman, that the paint would level out even though it was brushed on. I didn’t want obvious brush strokes to be visible. 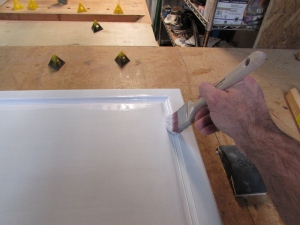 I took a lot of time on the details, trying to prevent drips. The first coat covered fairly well, especially the feet. 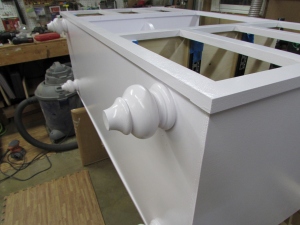 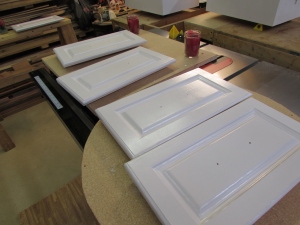 After a couple of hours, I finished the first coat on everything.

The first coat covered very well and would probably be sufficient, but I will probably be applying a second coat tomorrow, if I have the time. I really don’t want to, but I may as well do it right…