My friend Bill has another guitar for me to rebuild. The last one was the Jerry Jones Baby Sitar. This one is also a Jerry jones, but it is a baritone guitar. Bill wants it made the same way I rebuilt the Baby Sitar, so the body will be made with walnut and it will be topped with Buckeye burl. 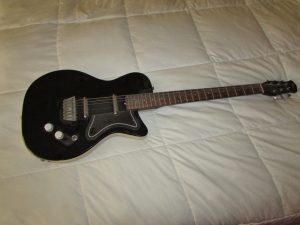 Step one is to remove all of the hardware as well as the neck.

Once removed, I started laying out the body on the computer. I immediately noticed a problem with what Bill wanted. This was a hollow body guitar. If I tried to attach the burl top without support below it, It would crack under minimal pressure. The burl is very soft so it cannot be counted on for anything structural. I decided to build this body as a solid body, but with a lot of lightning holes. To do this on my CNC, I needed to make it in two pieces. I carefully laid out all of the vectors in CAD and exported DXF files to be imported into the Carvewright software. Here is a PDF file of what I came up with: baritone-vector layout.PDF.

Once I had all the vectors, I brought them into the software and created my programs for the CNC. 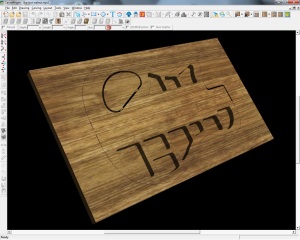 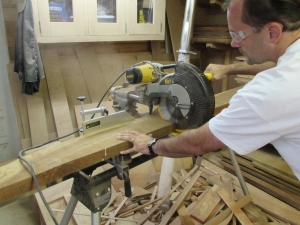 Cutting down a piece of 8/4 walnut

To create the panels, I started with a piece of air-dried, 8/4 walnut.

I cut it 4′ long, then cleaned it up on the planer and the table saw.

Cleaning up the edges

There was a noticeable twist to the board, so I cut it in half and set up my planer sled.

I adjusted the screws to support the curvy parts, then ran the board through the planer to flatten the first side. After two passes, side one was flat so I flipped it over and planed the other side parallel to the first.

Two passes and it is flat 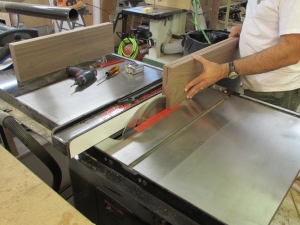 Starting the resaw on the table saw

After doing this for both boards, I started the resaw on my table saw, then finished it up on the band saw. This saves a lot of wear on the band saw, having to cut through only the center 1″ connected area, rather than the whole 7″

Finishing up on the band saw

I planed away the center, then planed the board down to 3/4″ thick.

Makes a nice couple of panels

I applied some glue and clamped up the panels. 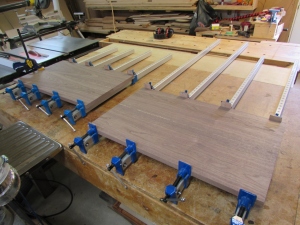 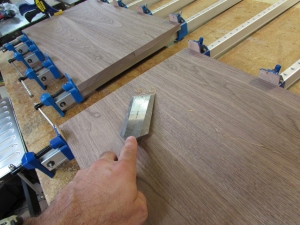 Cleaning up the squeeze-out

I really took my time lining things up when I clamped it so there was hardly any clean-up to get the joint looking nice. I just scraped away the excess glue and I was ready for the carver.

A little scraping and its ready to carve

Carving the back side of the bottom first

I decided to run the bottom half of the guitar first.

After about an hour and a half of carving, it was ready to flip over and carve out the back half of the lightning holes. 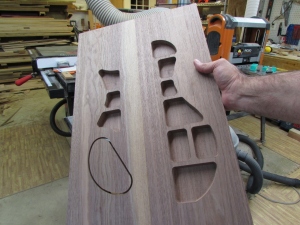 Trimming out the last 1/32″ with a knife

My board was slightly over 3/4″ thick, about 1/32″ over-thick to be precise. I needed to slice through that thin barrier before I could get my pull saw through to cut away the tabs that held the body in place.

Cutting away the tabs

Since the carve took about 3 hours to run, it is now midnight so I will work on the top half tomorrow. 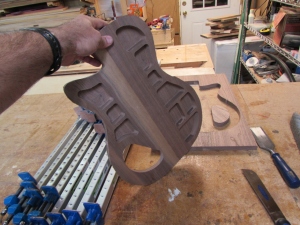 The back half is done