My friend Tom Iovino, over at Tom’s Workbench started Get Woodworking Week a couple of years ago. His goal was to inspire people to invite someone into the shop and introduce them to woodworking.

A little over two years ago, I stumbled across Tom’s blog. I had been woodworking for years, but had not thought much about inviting others into my shop. I decided to start working with my son, Adam. Of my three boys, he was the only one that showed an interest. We submitted a few of the items Adam had made, to Tom’s Get Woodworking Week contest, and Adam won a cool prize. He has been friends with Tom ever since, and even got to meet him at Woodworking in America this year. 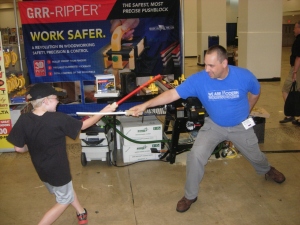 Adam has his own bench in my shop and works on his own projects when he has the time. He also helps me on some of mine now and then. 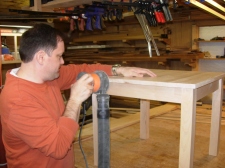 This past year, I took on another new student in my shop. My friend Rob came to me and asked if I could show him how to build a few things. I have never thought of myself as a very good teacher, but I thought I would give it a try. Rob wanted his first project to be a set of end tables for his living room couch. He gave me the measurements and I came up with a design that he liked. I decided to keep the joinery simple and we used pocket hole screws to attach everything. The project was a good exercise at panel glue-up and simple joinery. With that success, he was soon asking for more. 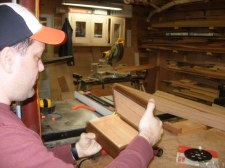 Gaining confidence from the successful creation of two new end tables, Rob’s next request was a small humidor. This was a very interesting project. The joinery was a bit more difficult, requiring glued joints and some very precise cutting. We also had to do a lot of research first, into the materials required. Wood moves when introduced to humidity and we had to find just the right materials to make the humidor work right. I was also able to introduce Rob to hand tools. We made a few mistakes along the way, but the humidor works well and looks pretty good too.

Next we shifted gears a bit. Rob was about to propose to a certain young lady and wanted the ring box to be something special. I left the design completely up to him on this one. Once he knew exactly what he wanted, I drew it up on the computer and we carved it out on my CNC router. There was a lot of detail sanding and several coats of finish involved, and in the end this is what we came up with.

The future Mrs. Rob was sufficiently impressed and she said “Yes!” Oh, there was also a ring involved, but I think the box won her over in the end…

On his first three projects, Rob learned three different types of finishes and three different types of joinery. Feeling the need for a bigger challenge, he selected a cherry sofa table as his next big project. On this project we took a set of plans and modified them to increase the length and add a drawer. He learned a few more types of joints and several different ways to cut them. He also had the opportunity to work with a fourth finish. The sofa table turned out beautiful.

This process of teaching someone else has really given me the opportunity to slow down and think about how things are built. I realized that you can take a fairly complicated project and break it down to a series of fairly simple steps. I run into so many people who say “I could never build something like that.” and “I wish I had your talent.”, but the simple truth is that I just break every project down to smaller and smaller parts and assemblies until it becomes manageable. Every project that I build offers me an opportunity to try a new technique or a new type of finish. You can read books and scour the web for all the woodworking information you could want, but you will never learn how to build something until you get some tools and some wood and see what they can do when you put them together.

My son, Adam is now 11 and my friend Rob is well past 30… Both of them started out with the same goal, “To learn to make something” Adam now has some very cool wooden toys, that he has built, and one day he may pass some of them on to his kids. Rob’s confidence in his abilities grows with each new project. I am certain that before too long he will be building a lot more things for his family too.

Don’t just sit back and say “I could never build that.”
Get Woodworking!

This entry was posted on February 16, 2015 by Lwroten in Misc... and tagged Get Woodworking week.