Now that the doors are dry and unclamped, I cut them down to size. I subtracted about 1/8″ from the overall size of the openings. Tweaking here and there with my block plane, to get the best fit.

Trimming the doors down to size

After twisting the heads off of the first three Brass screws, that came with the hinges, I tossed them aside and grabbed a box of #6 wood screws that I bought at Lowes for another project. They worked without a problem, so I will ignore the fact that they are silver. It’s just a shop cabinet.

Attaching the hinges to the doors

After mounting the hinges to the door, I marked the holes on the cabinet, then drilled pilot holes for them as well.

Attaching the doors to the cabinet 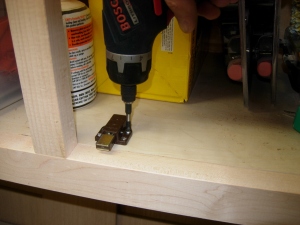 After the door was installed, I mounted a press-to-release magnetic door catch that I had in my box of left-over parts. I was going to buy spring catches, but when I saw these I realized that I wouldn’t need knobs or handles for the doors. Just press and they pop open.

One door down, two to go

After about an hour and a half of work, the doors were done and mounted. The only draw-back, that I see, is the fact that the Lexan seems to attract dust and hold it with a static charge. On the flip-side of that, though, the Lexan won’t shatter if hit by a chunk of wood that may get kicked up from the saw.

This entry was posted on March 20, 2014 by Lwroten in From the scrap bin..., Misc... and tagged mounting hinges, Shop cabinet, shop cabinet doors.