I didn’t have much time to work last night, so I focused on finishing the lids. 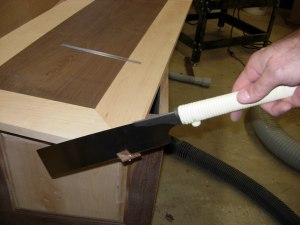 I used my new pull saw to trim the splines back to within 1/16″ of the lid, taking care not to cut the lid itself. I used my block plane to trim back a few of the splines, but it shaved the lid on the final pass, so I decided to use a sharp chisel instead.

Clean up with a chisel

When the corners were all cleaned up, I sanded down both lids, working down from 80 grit, to take down the glue joints, to 220 grit. 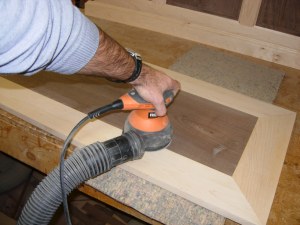 I am going to be a little pressed for time finishing these, so I bought a couple quarts of two different finishes, to test. They both claim to be fast drying, so I should be able to get at least three coats on in one day. The can on the left is a water-based polyurethane. The one on the right is a solvent-based lacquer. I have never used either, so I thought I would do a test to see what they looked like. I was pleasantly surprised that the water-based poly looked very similar to the lacquer. I was expecting it to have a plastic/milky look. The lacquer, however had a smell like nail polish and instantly gave me a headache. When I checked on the samples later in the evening, the water-based had raised the grain as expected, but both dried to a nice clear finish. I sanded them down and gave a second coat, but I suspect that I will be using the poly.

I was planning on adding a 3/4″ strip below the lid, to thicken it up, but after looking at the chests I decided that I prefer the current look. If I thickened the lid, the spline would be off-center, and it wouldn’t look right. I also toyed with the idea of rounding the lid corners, but I really like the way they look. At present, I think I will add the base skirt, and hinge hardware, and call it finished.

I do have a couple of days left to work on this project, so if anyone has any suggestions, feel free to comment. I am not sure if I am just really starting to like the way they look, or just tired of looking at them…