It has been a while since I have worked on this project. I recently had to order something from Guitar Fetish so I got some of the parts that I needed for sizing some of the holes on this guitar. The main thing I needed was the football style jack for the front.

Carving the jack cavity with a spindle gouge.

I wanted to slope the opening to minimize the amount of material I would have to remove. It occurred to me that one of the spindle gouges from my lathe might work for carving as well. The gouge was thicker and a little bulkier than you would like for carving, but it served my purpose.

After I carved the slope, I tried routing out the rest of the pocket, but bit off more than my router bit could chew. I snapped my new 1/4″ spiral up-cut bit in half. No injuries, but I sat that aside and just drilled the pocket out with a forstner bit instead. 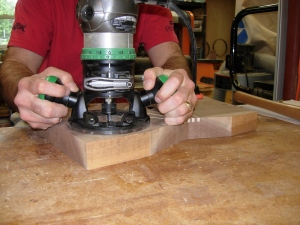 Routing the rest of the jack cavity 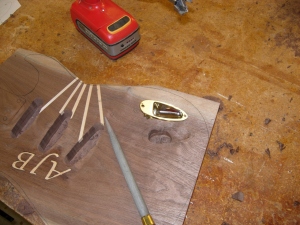 When I finished drilling that I decided to drill out the center holes for the potentiometers.

Drilling out the centers for the tone and volume knobs 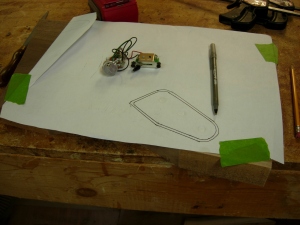 Tracing out the pocket for the controls

When they were done, I used the holes to line up my pattern from the front. I flipped it over and taped it to my board after the holes were lined up. To transfer my marks, I heavily traced the pocket on my pattern with a ball point pen. This left a nice imprint on the wood. 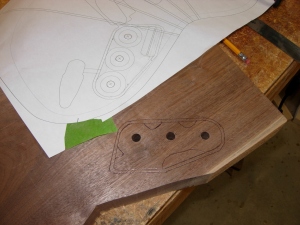 I drew in the imprint with my pen to darken it up. Next I drew in some areas where I will leave some wood for the screws in my cover. I used my 35mm forstner bit to hog out all the material where the potentiometers will sit.

Hogging out the pocket with the forstner bit

Drilling out the switch area

starting to rout the pocket

With the majority of the material removed, I switched back to my router (with a new bit). As I started to rout out the location of he cover, I realized that I hadn’t made the cover. I prefer to make the cover first so I can get a good fit. I grabbed a scrap piece that I had previously planed down to 1/8″ thick, and transferred the imprint from my plans again. 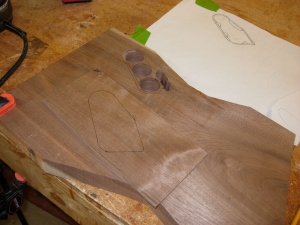 Laying out the cover

Cutting the cover on the scroll saw

I cut this piece out on my scroll saw because it does tighter turns than my bandsaw. 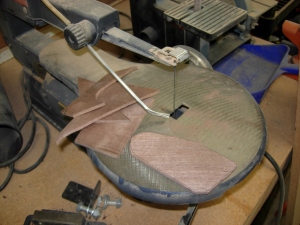 Once it was roughly cut out, I sanded it down to the line on my spindle sander.

cleaning up the edges of the cover

I traced the new cover to make sure the lines I had were accurate, then routed out the first 1/8″. 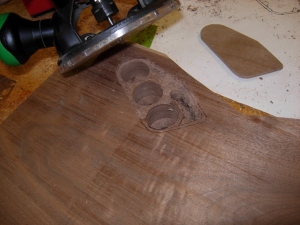 Routing out the thickness of the cover

After a bit of additional trimming, I had a fairly nice fit.

Routing the rest of the pocket

Next, I proceeded to route out the rest of the cavity. 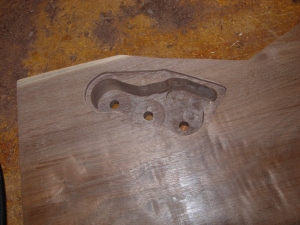 I wanted to see how well the grain matched, so I rubbed on some Naphtha. It evaporates quickly, but brightens up the wood to look like it will when finished, for a minute or two. 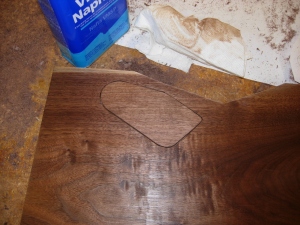 Naptha shows you what the finish will look like

I had attempted to line the grain of  my scrap piece as best as I could with the guitar body, when I made the cover. I was surprised to find that the piece of scrap came from the board that was next to this one, when the tree was sawn into boards. The grain was a perfect match. I couldn’t have done that if I tried. 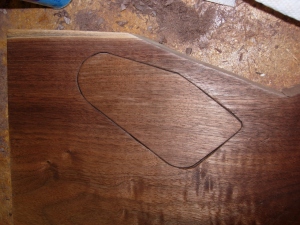 With all the pockets now cut out on the lower part of the guitar, I decided to go ahead and cut out the body.

Cutting out the body

I cut it out on the bandsaw, leaving a little under 1/16″ of excess to be sanded away with the spindle sander.

Cleaning up the edges with the spindle sander

The sapwood sure looks pretty, I hope a fair bit is left when I finish with the edges.

Edge of the guitar 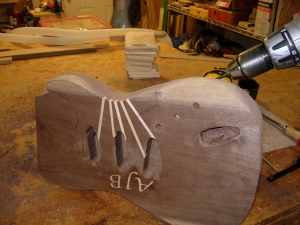 The next detail to take care of was drilling holes for the wires. I drew lines on the back from the control cavity towards the pickup pockets. I angled the drill toward the bottom of the pickup pockets and lined the bit up along the lines I drew as well.

All holes drilled for wires

I still don’t have all the hardware, but I am pretty sure my holes come out in the correct locations. If not, I will channel the wires in additional grooves cut by a chisel.

Slot cut for the switch

The last thing I did was line up the 5-way switch and locate the slot. I drilled a small hole at each end of the slot and cut along a straight edge with a utility knife to connect the sides of the holes. With patience, I had a nice thin slot. I had to square up the pocket a bit, but the extra switch that I have now fits the hole nicely.

Trimmed out for the switch

That’s enough for one day, it is after midnight, again…

This entry was posted on June 1, 2013 by Lwroten in Guitar and tagged custom stratocaster, walnut, walnut guitar.