I learned something new today… Before I go into that though, I just want to mention that I do not learn well from books and classes. My best teacher has always been irritation at my own mistakes. I don’t read books on woodworking, watch hours of videos, or take regular classes. I just see something and it inspires me to try something new. I never once stop to think about why I can’t do something, that would be pointless. Once you remove your fear of failure, your options are limitless.

Prepping for the next coat

I managed to put three coats of the wipe-on-poly last night, emptying the jar that I mixed. I mixed up another one then went upstairs to get ready for bed. This morning I went down and proceeded to start rubbing everything down with the scotch-brite pad. It hardly needed it, but I figured it wouldn’t hurt. When I got to the last bench, I noticed that it was oily. Then it hit me. I turned to look at the jar that I had mixed last night. The poly and the thinner had stayed mixed, but the oil had sunk to the bottom. I have always known that oil floats on water, but never thought that it might sink in something else. I had actually been checking to see if I was getting any oil on the top of the mix. Not seeing any I had kept working. The oil had actually been collecting slowly at the bottom, so when I got down to the last bit in the jar, it was nothing but oil. Oh well, minor set-back. After thinking about it for a minute or two, I decided to wipe both benches down with some thinner on a paper towel. This seemed to work well. It pulled the oil right off. After the thinner evaporated, the surface was ready for coat number four. 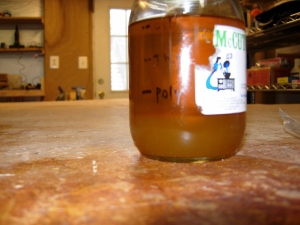 After the fourth coat was applied, I took a few more pictures, but they are all starting to look the same… I should be finished today since it is supposed to snow for the rest of the day. I will, of course, remember to shake up my finish before every coat.

This entry was posted on March 6, 2013 by Lwroten in furniture and tagged benches, dining room bench, furniture, oak.