Adam and I went to the Baltimore Woodworking show this past weekend, and bought a couple of new tools. I was good, I only bought three things. Adam spent some of his Christmas money on a new 12v cordless Bosch drill, some sanding blocks, and a few other odds and ends. I forgot to bring my camera, so no pictures of the show, but Adam and I got to watch some different demonstrations from the local woodworking clubs and test out some cool tools. We also got to chat a bit with the guys from 360 woodworking who are promoting their new online magazine. But, mainly we went to shop…

New Bosch Colt with plunge base

I picked up a new router, the Bosch Colt, along with the plunge base. It was so cute, I couldn’t resist. I know I already have five other routers, but you can never have too many. This one is a trim router with a very small base. It will be very handy in tight corners, but powerful enough to do dados and edge trimming as well. I also picked up a keyed chuck for the tailstock of my lathe, at a great price. My big purchase was a new dust collector, the 2hp mobile cyclone from Laguna. My old Delta still works great, but I need the capacity to run dust collection on several machines at once. This baby can do that, all by itself. It was a little pricey, but I got 15% off, at the show and it was already fully assembled, which saved me hours.

My old and new dust collectors

Once I got it home, I parked it in its new home and started wiring up the new 20A, 220v receptacle, so I could fire it up. 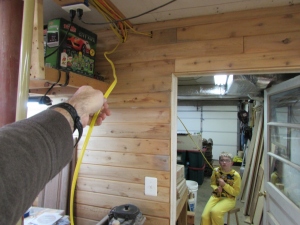 Running the wire through the wall

Adam was supposed to be in bed, but he wanted to help so I had him pulling wire as I fed it through the wall.

Wiring up the new breaker

I ran it to the electric box and pulled the cover off and ran the wires inside. I added the new breaker and wired it in. I am not the neatest at running wires, but I got it all hooked up and replaced the cover. 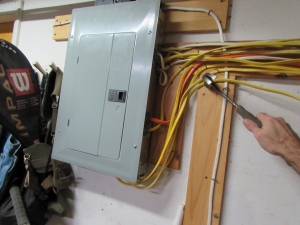 Stapling down the wire

I stapled the wires to the wall where all of my other shop wiring is run. I know the exposed wiring is not entirely attractive, but it is in the garage. I installed a box above the dust collector and hooked up the receptacle.

I forgot to purchase the correct cover ( tomorrow’s project), but I hooked it up anyway.

Adam fired it up and played around with the suction. It was far more powerful than my Delta, it nearly sucked his arm in. Don’t worry, it is safe enough. the inlet is in the cyclone and nowhere near the fan.

This new collector has a cool roll-away drum to collect the dust in as well. I can roll it out to the garage and pull the bag, and not worry about dumping dust and making any mess, like my old one. I will keep you updated on the new tools as I break them in.