Before I assemble the footboard permanently, I need to install the bed rail fasteners.

I bought Rockler’s 6″ bed rail fasteners. I noticed a lot of mixed reviews on them. After comparing them to their reviews, I realized that all of the bad reviews were from people that had installed the receiver plate upside down. When it is done wrong, the hooks hit one of the screws, and the plates don’t line up. Just flip the plate and it works perfectly.

They look pretty straight forward to me. I need to recess a pocket with deeper recesses where the hooks insert. I found an acceptable location for the first one and used a self-centering punch to mark the screw holes.

With the plate screwed in place, I traced it with my knife to mark the pocket location.

I used a 1/4″ spiral up-cut bit set to the depth of the hooks to create the hook recesses first.

Then I set the bit to a much shallower depth and cut out the pocket.

Routing the rest at a shallower depth 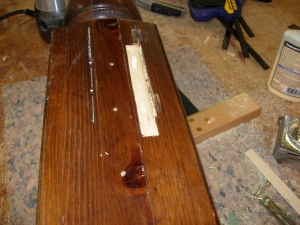 Using a chisel, I cut out the rounded corners left by the router bit, and adjusted the pocket where needed.

Squaring up the corners

I reinstalled the screws and tested the hook plate. 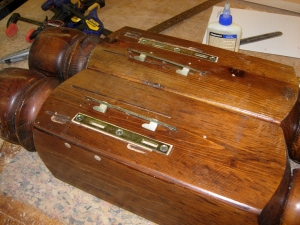 I repeated the process on the second footboard post as well as the headboard posts. 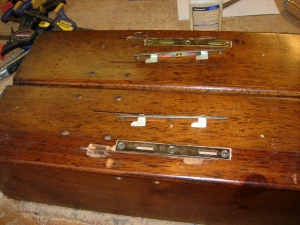 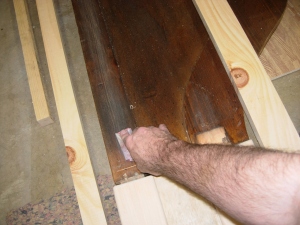 I wanted to work on the posts while I could still fit them on my bench.  Now that the hardware is installed, I can glue up the rest of the footboard.

Applying glue to the tenons

I applied glue to the tenons on the extensions and attached them to the posts.

Next I applied the glue to the side tenons on the footboard and slid the post and extension onto them.

Applying glue to the existing tenons

I don’t have clamps large enough to clamp up the entire footboard so I shot some brads through the tenons to prevent the joints from pulling apart while the glue was drying.

Brad nails to hold the tenons in place while they dry

I applied glue to the back side of the support beams and clamped them in place.

While the glue was drying I shot a bunch of brad nails through them as well. 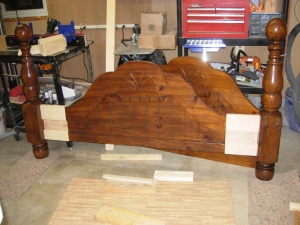 This should all come together nicely once I have applied stain, but for now I will set this part aside and move on to the headboard.

Oh well, its past midnight again, and I have to be up at 5:00 AM tomorrow. 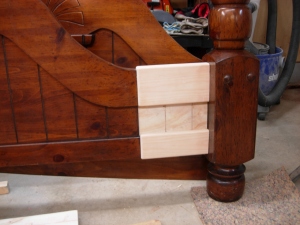