I just picked up my new drill press monday, and last night I had the time to set it up.

This thing is a beast. The package weighs about 270 pounds. My little bench top craftsman drill press wasn’t cutting it anymore. My projects either require more travel, more throat depth, or more power than my old 1/3 HP drill press could achieve. The steel city 17″ variable speed drill press seemed to hit all of my needs. I have never used a Steel City product before, so I am going to pass on my initial impressions for anyone who may be interested. 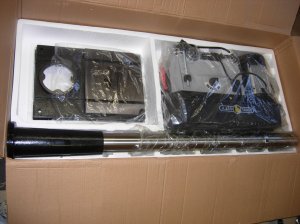 After my son and I managed to get the beast into the shop on a pair of dollies, I opened it up. 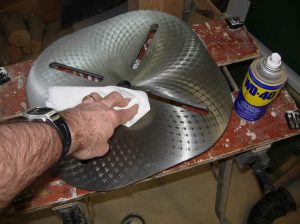 Clean up with WD40

The first thing the instructions directed me to do was wipe down everything with WD40 to remove any oil or Cosmoline that gets applied at the factory, to prevent rust in travel. I was surprised that it seemed to be only covered in oil, which made cleanup very easy. The next step was to apply paste wax to help prevent rust.

Coat everything with paste wax 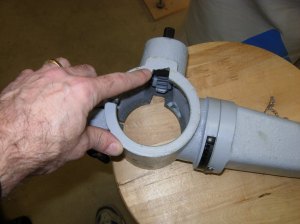 The first problem that I ran into was the casting at the base of the post was a little off, preventing one of the 4 bolts that holds the post to the base, from tightening all the way. The hole is too close to the column. I tightened the other three for now, I may come back and grind a little pocket for the fourth later. The next issue was the table support arm. Another casting problem. A bit of slag was left in the groove, that allows the table to travel vertically. 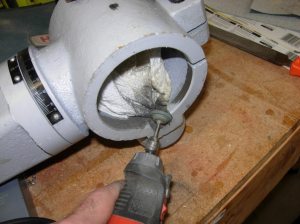 Grinding out the bad spot

I used a small grinding wheel on a dremel tool to clean it out. I stuffed a paper towel into the center to protect the gear and all of the packaged grease from collecting any metal dust. That could cause binding or wear at some later date.

The instructions caution that this assembly requires two people to install the head. I, of course had just myself, and a 10-year old. Since the head needed to be lifted 6 feet in the air to be assembled, and weighed over 150 pounds, I decided to lay the whole thing on the ground instead. It is a lot easier to assemble this way. I slid the lighter base assembly into the head, then just lifted the head up until the press was vertical again. It would have been easier with two, but possible to do by yourself.

With the grunt work out of the way, the boss stepped it to take over.

The expert takes over…

I will have time another day to put the press through its paces. Today I only had time for assembly. Besides the fact that there are a few quality issues with the castings, I am impressed with the machine overall. A few key features that attracted me to the machine are the 1HP motor, the variable speed that can be adjusted on the fly with the push of a lever (no adjusting belts to different pulleys), and the 6″ spindle travel. There were a couple of minor quality control issues that should have never gotten past inspection. One was the arrow on the variable speed knob. It was bent and a bit chewed up looking. Fully functional, but not pretty. Another issue was the ruler on the 6″ depth gauge. It was applied 3/4″ too high. The spindle has to come down 3/4″ to zero out. There may be a reason for it, but it seems like it should start at zero. The third issue was the castings that I mentioned earlier. None of these are a deal breaker, but for $850 I expect a bit of quality control. All in all, I think I will be happy with the machine. The added power and travel will be very welcome. I just hope I don’t have to move it again…