Long day today. I ran out and bought the stuff I would need to add a 220V line to the shop. I also decided to make the trek back to woodcraft and get the rest of my parts to complete my saw setup. So after quite a lot of driving, I now have everything to get the saw up and running.

I pulled the face off the panel and started moving breakers around. I needed two spaces that were next to each other, so I shifted a couple out of the way. Only one clock needed to be reset, I think. I also decided to add a second 120V line while I was at it. 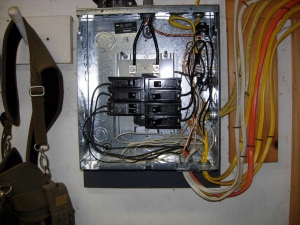 Stapling the wire for the new circuit in place

I fished the wire back along and through the wall to my shop. When I got to the junction box that used to tie this circuit to the table saw, band saw, lathe, planer, and dust collector, I separated it to two separate circuits. One is now dedicated to the table saw. The other circuit will be for the rest. 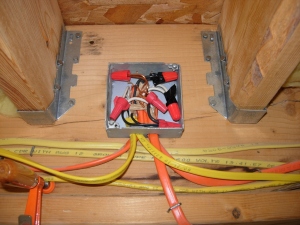 I used to run most of my tools from a quad receptacle under my bench. I had to put in a new box for the 220V receptacle, so the two new circuits will run to them. 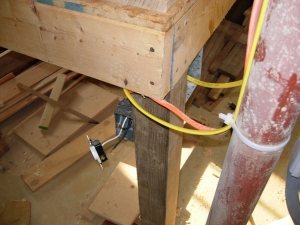 Once the electrical was done, I opened all of the new boxes that I just brought home. I spent a few hours finishing up the installation of the rails. Tomorrow, I need to figure out how to raise the saw up 2″ to meet the bench top. The old saw had a mobile base that elevated it. The base on the new saw retracts when it is released. I would rather lower my bench, but that would be a lot harder to do. 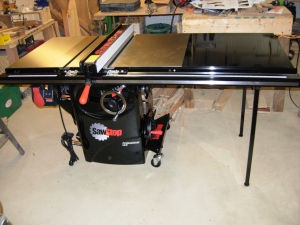