Friends around the world

I started this blog nearly two years ago. I mainly wanted a place to post pictures so people could see the progress of the projects that I was working on for them. I eventually started picking up a few followers and decided to make the blog a bit more instructional, walking people through my projects, mistakes and all.

In the past two years I have made a several friends online that I have had the chance to correspond with, online as well as meet in person, when I have gone to the Woodworking In America conferences. I am always amazed, when I check my blog’s stats and I see that I have some views from a new country that has not visited my site before. I have had views from over half of the countries in the world. Amazing!

About two months ago, I picked up a new follower, Paul from Romania. He saw my post about carving the last supper and sent me a message, asking if he could get a copy of the digital file to try on his CNC. I was happy to share, and I sent him what I had. He sent me a couple of images in return. Yesterday Paul emailed me a few pictures of his successful carve. He has hopes of creating a much larger version, but I think he did a very nice job, so I thought I would share his pictures. 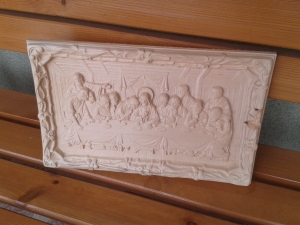 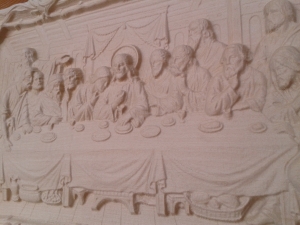 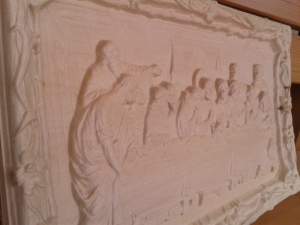 I don’t travel much, and I have never traveled far from where I grew up. I just think it is amazing to hear from people from all over the world. I have picked up followers from the complete opposite end of the globe, and several other countries in between. Thanks for following my blog. I hope there is something useful on it for everyone.

This entry was posted on December 21, 2014 by Lwroten in Misc... and tagged carve last supper, carvewright project, carving the last supper.